In the vicinity of our restaurant you will find: 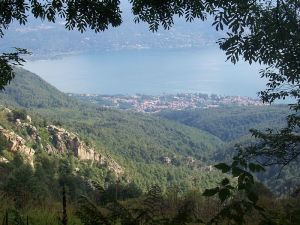 Situated at a height of approximately 193 m s.l.m., its surface is 212 km² of which approximately 80% ’ l is located in Italian territory and the remainder 20% in Switzerland.
It has a perimeter of 170 km and a length of 54 miles (the eldest Italian Lakes, Hence also the name of “Greater”); the maximum width is 10 km and the average of 3,9 miles.

The maximum altitude of imbifero basin is Dufourspitze in the Monte Rosa massif (4.633 m s.l.m.) does that mean is instead of 1.270 m s.l.
The basin is characterized by the existence of about 30 ’ of artificial reservoirs with a collection of approximately 600 million m³ of water, If issued simultaneously once the lake level by approximately 2,5 m. Its maximum depth is 370 m (in cryptodpression between Ghiffa, Porto Valtravaglia).

The major tributaries are the Ticino, the Maggia, the Toce (It receives the waters of the Creek and then Lake Strona d ’ Orta and the Tresa (in turn an emissary of Lake Lugano and nourished by the Margorabbia).
Major tributaries have a different flow patterns, While Ticino and Toce which have a catchment area for high altitude reaches a maximum flow during the period between May and October coinciding the dissolution of snows and glaciers, other tributaries have a trend strongly influenced by precipitation. Minor tributaries include the rivers Verzasca, Cannobino, San Bernardino, Jonah and Boesio.
L ’ only emissary is the Ticino flowing from Lake in Sesto Calende.

In the Lake, in the arm of the Lake called Borromeo Gulf where opposing views and Pallanza and Stresa, There is also the small archipelago of the Isole Borromee. 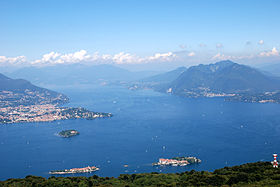 The ’ archipelago comprises three islands, a isolino and a rock:

East mount Mottarone separates the Lake Orta from Lago Maggiore, While West high mountains up to 1300 metres separate the water from the Valsesia.

Is the westernmost of the great pre-Alpine Lakes, originated from the southern front of the Simplon glacier.

Contrary to what happens with many Alpine Lakes, that have an emissary to South, the waters of the lago d Orta ’ leaving the Lake North.

Cross the city of Omegna, giving life to the Creek which flows into the Nigoglia Strona that, in turn, flows into the Toce and, then, in Lago Maggiore.

At the center of the Lake lies the island of San Giulio ’, very contained dimensions, that houses the remains of Basilica Holy namesake.

If you want to relax with a nice round of golf only a few miles from us you only have to choose the structure you like!

Open all year except January ’.

Closed on Monday except during the summer months.

Open from March to November.

From 22 June to 7 September open daily.

The Sacro Monte di Varallo is, among the existing Holy mountains, the oldest example ’ and artistic sights.

It consists of a basilica and 45 chapels frescoed and populated by over eight hundred statues of life-size polychrome terracotta.

Is located in the municipality of Varallo (Vc), in Valsesia.

Along with the other Sacri Monti located between Piedmont and Lombardy was declared, the 4 July 2003, World Heritage site
The ’ area is part of a natural reserve of the Piedmont region, the Special nature reserve of the Sacro Monte di Varallo.

The Sacro Monte di Domodossola belongs to the Group of Prealpine Holy mountains “a world heritage of humanity ’” dell’Unesco.

In 1656, two Capuchins chose Mattarella Hill, overlooking Domodossola, to make it a place that's hosting the Sacro Monte Calvario. This created a series of twelve chapels with a decorative apparatus of statues and frescoes, representing the stations of the cross and three chapels depicting the deposition from the cross, the Holy Sepulchre and the resurrection.

Atop the Hill is the octagonal sanctuary of the Holy Cross, whose construction began in 1657.

The Colossus of San Carlo Borromeo (said the Veneration or, el Sancarlùn in the local dialect), is a huge statue situated Arona (NO) in the hamlet of San Carlo, the Sacro Monte of San Carlo.

For a comparison of the size of the statue, consider that the body (from the feet to the head) the statue of liberty so far 46,5 metres while the length of the index finger is ’ equal to 1,95 m.

The statue is open to the public, who can climb through a first spiral staircases scale and then pegs, arriving at the ’ head of St. Charles. 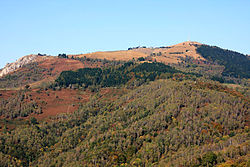 is not well differentiated from other hills but form a hilly massif mountain called Mergozzolo-, between Lake Maggiore and Lake Orta, between the provinces of Novara and Verbania, Although the true Summit at its, for a few hundred metres, located in the province of Verbania, in the town of Stresa.
Despite being among the peaks less high in the Alps, overlooks a spectacular view. From its rounded Summit, You can enjoy a magnificent 360° view from the Maritime Alps to the Monte Rosa, passing through the Po Valley and the “Seven Lakes” (Orta, Greater, Mergozzo, Biandronno, Varese, Monate, Comabbio). Easy to see, in good time, the triangular peak of Monviso.
Due to its location between Lakes Orta and Maggiore ’ d and her being more a meeting workspace ’ (also thanks to the presence of extensive pastures on top) that a line of separation, is known as “The Two Mountain Lakes“. 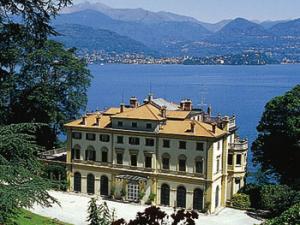 The villa Pallavicino (also called Boffalora) It is a building of Renaissance art and lies outside the ancient city walls of Busseto.
Inside is the Museo Nazionale Giuseppe Greens in addition to Zoological Park

There is no certainty on the author of the project ’ (probably Bramante or Vignola) and Pallavicino, that purchased in the 1930s from the 16th century to serve as a summer residence, I'm not clients.
Rose, In fact, in the early 16th century at the behest of Matthew Marri.

Sure is, though, that the ’ Emperor Charles V d ’ Austria, in 1533, before leaving from Busseto, he granted the title of city for all loyalty reward ’ Empire, He went to the Villa and pleased him so much that requesting a design to remember;.
L ’ opera, whose author is presumably the same Salon decorator of coats of arms of the castle of Torrechiara, dates back to the seventh-eighth Decade of the 16th century.
The ’ building, Despite being surrounded by a moat, It was not created for purposes of defence and at one time the balustrade that surrounded the Palace bore numerous statues.

At the end of the 17th century Alessandro Pallavicino orders the restructuring and the raising of ’ villa, entrusting the direction likely to Antonio Maria Bettoli, executor of palazzo Santa Fiora di Parma.
Hotel front view, Classic style, is relieved by vertical momentum given by stress that diamond angles, horizontal cuts of string courses and cornices from the Rococo stucco done by Carlo Bossi under Commission of the Marquis Alessandro in the fourth decade of the 18th century.

The botanical gardens of Villa Taranto in Verbania, in the northeastern part of the Castagnola promontory of the western shores of Lake Maggiore, between fractions of Pallanza and Intra, in the province of Verbano-Cusio-Ossola (VCO).

The terraced gardens cover an area of about ’ 16 hectares, that host tens of thousands of plants.

Are crossed by 7 miles of boulevards and currently have a great reputation worldwide, as they are considered among the most beautiful d ’ Europe

This is just a brief overview, in fact in our area you will also find: